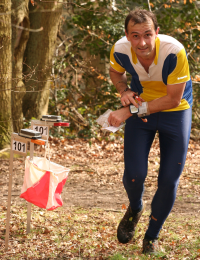 My first orienteering event was in November 1977 whilst I was still at school, and since then I have averaged well over one event a week (2530 events and counting as at January 2019).

I represented Great Britain at junior level, but could never run fast enough to make it to the top. Competitively my best results have been being British Night Champion at M45 in 2009, winning the Harvester Trophy Relay in 1986 with LOK, and being M40 British Relay Champion in 2005 with HH. I have also held several somewhat less prestigious titles including being Mallorcan Champion in 2004 and Queensland M40 Champion in 2005. I have travelled all over the world to orienteer, including trips to Russia, China, Hong Kong, Australia, New Zealand, Canada, the USA, Swaziland, South Africa, Iceland and most of Europe.

I am an active planner and controller, and controlled the two sprint races at Round 1 of the 2005 World Cup in Guildford in 2005, the British Sprint Championships in 2006, 2008 and 2013 and the JK Sprint Race in 2007. Spot a pattern? I was Chairman of BOF Technical Committee from 1997 to 2003, during which time I was responsible for a complete rewrite of the BOF Rules and Guidelines, and I was the IOF Senior Event Adviser for the Junior World Orienteering Championships in Italy in 2009. I have also been Chairman of LOK (twice) and the South Eastern Orienteering Association. I have produced a large number of maps of schools, Guide Centres and even some real woodland. My largest map to date was for the 2013 St Albans City Race, for which I was also the planner. This won the Walsh Trophy for the best urban or sprint map in 2013.

I am also the developer and maintainer of Routegadget 2, a web-based application for drawing and comparing orienteering routes. This is used by over 100 clubs worldwide.

In my spare time I am an independent engineering consultant specialising in safety engineering for computer-based railway control systems with a focus on ERTMS (European Railway Traffic Management System). To maintain the orienteering connection, my company is called Surebridge.